The sun was hot but the cars were cool at the 10th Anniversary Auto Club Employee Car Show on June 18. The show featured an impressive range of vehicles including BMW’s, Fords, Chevy’s, Cadillac’s, Volkswagens, a Studebaker and more. Held at the Automobile Club of Southern California’s Administrative Offices in Costa Mesa, California, the event hosted approximately 4,500 attendees, made up of employees, retirees, family members and friends.

The event featured over 250 vehicles spanning 11 decades. Classics, hot rods, muscle cars, antiques, motorcycles, racecars and some of the latest supercars were all represented. Trophies were awarded in 14 categories, including a special category for BMW’s in recognition of the marque’s 100th anniversary.

Our celebrity guest was three-time Indianapolis 500 winner and 2007 “Dancing with the Stars” champion Helio Castroneves. Castroneves joined Auto Club CEO Bob Bouttier on stage for a Q&A before signing autographs for attendees later in the day. 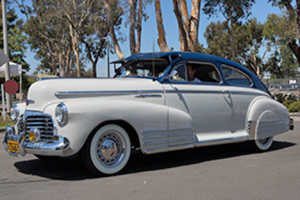 The McKernan Award for Best of Show went to this 1942 Chevrolet Fleetline.

The Auto Club Employee Car Show is known for having some specialty vehicles on display and this year was no exception. Examples included the Auto Club’s recently restored 1961 Dodge Polara CHP Pursuit car, two BMW i8 high performance Hybrids, a collection of restored military Jeeps, a rare 1956 BMW Isetta on loan from the Petersen Automotive Museum, and two jet powered dragsters from Lucas Oil. As always one of the fan favorite activities of the show was the chest-pumping “cacklefest” by a group of five nostalgic race cars revving their alcohol-fueled engines.

The musical highlight of the show was the debut performance by the ACE Garage Band, featuring five talented Auto Club employees including executive musicians. The ACE Garage Band delivered a rockin’ performance of classic rock covers that set a perfect soundtrack to the 10th Anniversary Car Show.

The Kids Zone grew from prior years, hosting balloon artists, face painters, super heroes, carnival games, video games and giveaways like the AAA Mini Map for all the children.

The Automobile Club of Southern California Employee Car Show was established as a thank you to our employees for bringing Legendary Service to our Members.

More than 130 volunteers and staff set up the show, checked in cars, greeted visitors, took photos, assisted with lunch lines, tallied votes and helped with tear-down and clean-up. 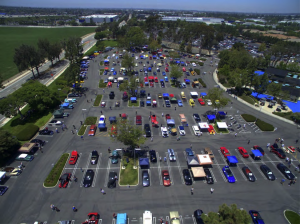 Chicago, April 5, 2016 — The Automobile Club of Southern California has been named a Gold LearningElite organization for 2016 by Human Capital Media (HCM), the largest integrated media company supporting the human resources industry in the United States and publisher of Chief Learning Officer magazine. The winners of the 2016 annual LearningElite awards were announced during HCM’s LearningElite Gala, where the best companies in learning and development gathered for the annual awards ceremony. These companies are all organizations that employ exemplary workforce development strategies and deliver significant business results.

At the ceremony, AAA was ranked number 35 from more than 300 applicants. The learning and development team at AAA was recognized in part for their development of a new multi-tiered leadership development program, results driven instructional design processes, introduction of gaming functionality into e-learning and overall organizational learning strategy.

The Human Capital Media Research and Advisory Group partnered with an impressive group of chief learning officers and other senior learning and development practitioners to develop this one-of-a-kind program designed to recognize the top organizations within the learning and development industry. LearningElite successfully identifies industry leaders, as well as best practices, principles and strategies necessary for top performance.

Some of the 70-plus organizations that made this year’s finalist list include Deloitte, Nationwide Insurance, Vanguard, State Farm, USAA, and many others.

To learn more about the LearningElite awards program and to see the full list of winners, please visit: http://clomedia.com/LEwinners.

Congratulations to the entire learning and development team at AAA University on their accomplishment!